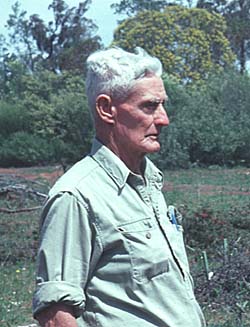 In his lifetime he established what is now known as Myall Park Botanic Garden at Glenmorgan, with collections of Australian plants, seeds, pressed plant specimens, and a botanical library. His conservation foresight has given future generations access to a valuable botanical gene pool, thus protecting the biodiversity of Australian flora.

The following is a list of honours received in Dave's long life:

Dave's life's work gave him recognition, but not financial reward. His garden was his life, and his dream was the perpetuation of his garden.

In 1988, Dave invited interested people to a meeting which led to the formation of a non-profit company, Myall Park Botanic Garden Ltd, which today owns and administers the garden. The directors of the company aim to ensure Dave's work will continue to augment knowledge of Australian flora and the environment.