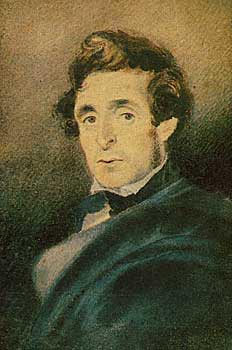 Arrived in Van Diemen's Land (Tasmania) in December 1827, after being convicted and sentenced to 7 years transportation to the colony for stealing some clothing in the city of Northampton. He had worked in London with the German lithographer Rudolph Ackermann. Gould painted pictures of the officers on board the convict ship Asia during the four month voyage. He found his first chance to paint in Van Diemen's Land when he was assigned as house servant to the Colonial Surgeon Dr James Scott, an amateur naturalist, who had Gould make detailed watercolour studies of native plant life.

Best known for his still life studies, often including dead birds, Gould's botanical studies done while assigned to Dr William de Little at Macquarie Harbour rank as the artist's most accomplished yet least known work. 177 of these botanical studies are in the Queen Victoria Museum and Art Gallery, Launceston.

In his last years he served several prison terms after further convictions for theft.

Examples of botanical studies attributed to him: