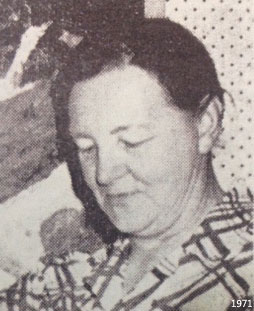 She came to Australia with her parents at an early age to the Longreach district where her father had pastoral interests. She was educated in Sydney and later in Edinburgh. On leaving school, she studied art in Sydney under Julian Ashton, Sydney Long, Dattilo Rubbo and at the East Sydney Technical College. She later travelled in India and after her marriage, moved to the country and founded the Young Art Club, the Cowra Art Group and was a foundation member of the Australian Wool Centre at Young NS.W., formed to promote spinning and weaving.

It was while living on the property in New South Wales that she intensified her interest in wildflowers and began compiling the first of a series of sketch books which now cover more than a thousand flowers from most areas of Australia.

Following her move to Maleny in 1973, she travelled extensively with her husband by campervan throughout Australia, including the Birdsville Track, the Tanami Desert, the Kimberleys and round Australia. Her husband died in 1991 and she moved to Canberra in 1999.

She has had one-man exhibitions at David Jones, Canberra; David Jones, Brisbane and McDonnell & East's Queensland Room as well as exhibiting at the Royal Queensland Art Society where she was a member. She has won a number of awards in various exhibitions in New South Wales and is represented in many private collections.

In addition to her artistic ability, Elizabeth McDonald was an expert spinner and weaver, a potter and wrote prose and verse. She was a competent public speaker, Elder of the Uniting Church, an a very useful pianist and an excellent cook.

She was the aunt of Bill McDonald, taxonomic botanist at the Queensland Herbarium.

She donated sketchbooks and other archive material to the Australian National Botanic Gardens Librarry and Archive on 25 Sept 2006.

Examples of her published artwork: