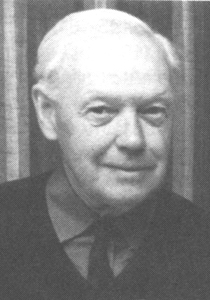 Collin Woolcock was born in the Adelaide suburb of Unley on 23rd September, 1914 and died in Portland Victoria on 23rd January 1990.

As a child he was interested in drawing and painting but when he finished his secondary education at Prince Alfred College, Adelaide. In December 1931 at the height of the depression the possibility of making art a career seemed extremely remote. The following year he worked as a cadet in the Barr Smith Library at the University of Adelaide and in 1933 he enrolled at the University where he read for a science degree majoring in Physics and Organic Chemistry. He graduated with a B.Sc. (Hons) degree in 1936 and thereafter worked in Adelaide and briefly in Melbourne before returning to Adelaide.

In 1939, two months before the outbreak of the Second World War, he married Dorothy Williams. With matching interests Collin and Dorothy worked together over the years as a team and in close partnership. During the war years Collin was employed in the central laboratory of an Adelaide firm that processed hides and wool which in turn were used in the manufacture of clothing and footwear for the armed forces.

Collin graduated with an M.Sc. from the University of Adelaide during the 1940's and in 1949 was asked by Thomas Borthwick and Sons to establish a fellmongery and wool scouring plant in Portland. Following the successful completion of this task, in 1954 he established a pathology laboratory at the Portland and District Hospital where he remained as Chief Biochemist until his retirement In 1975.

On account of other commitments Collin produced relatively little art work until late 1960's when he commenced drawing regularly and developed his skills in botanical art as relaxation from official duties at the hospital. However, during the intervening years from 1954 Collin maintained his interest in the arts while serving as President of the Portland Council for the Encouragement of Music and Arts (CEMA) for eighteen years. During this period Colin and Dorothy devoted much time to activities aimed at raising funds for the construction of an Arts Centre for the citizens of Portland. Among other activities, Open Art Competitions were organised and the winning entries were acquired for a Town Gallery. In 1987 Collin was awarded a Citizenship Award by the Town Council for outstanding services to the community for these activities and subsequently he was made a Life Member of CEMA.

Collin concentrated his attention on terrestrial orchids but following his retirement he broadened his interests and illustrated many other groups. Collin used pencil crayons for his coloured illustrations and perfected a very effective technique. Epacridaceae, Fabaceae and Proteaceae always appear to have been his favourites. Retirement marked the beginning of Collin's 'botanical years' and he often spoke of the pleasure that these years had afforded Dorothy and himself. During this period they travelled widely in western and eastern Australia. Collin and Dorothy had a very keen eye for plants and many a botanist has benefited from specimens that they collected, often in response to a specific request. I was often informed of the proposed itinerary of an impending trip well in advance and asked to nominate any plants of which material would be particularly welcome. Collin and Dorothy enjoyed working with and for amateur and professional botanists. They worked as a team with Collin concentrating on collecting, drawing and taking photographs and Dorothy making notes and writing.

One outcome of their joint endeavours was marked in 1984 by the publication of 'Australian Terrestrial Orchids' with the art work by Collin and the text by Dorothy. Towards the end of 1989 'A Fieldguide to Native Peaflowers of Victoria and Southeastern Australia' appeared once again with text by Dorothy and illustrations by Collin. Still to appear in books being published by the Society for Growing Australian Plants are Collin's illustrations of the Grevillea species and of the mountain flora of the Kosciusko area.

Many people will be familiar with Collins illustrations which accompany part I of the third edition of J.M. Blacks 'Flora of South Australia' by J.P. Jessop (1978) and the four volumes of the 'Flora of South Australia'(1986) edited by J.P. Jessop and H.R. Toelken. Collin's line drawings have appeared in several journals including The Orchadian, 'Journal of the Australian Native Orchid Society' and the 'American Orchid Society Bulletin'. He was a regular contributor to Australian Plants and illustrated all of A.C. Beauglehole's 'Victorian Land Conservation Council Study Area Reports'.

In 1976 Collin held a one-man exhibition of orchid drawings in the Russell Advise Gallery, Melbourne. In 1985 his work was exhibited at the Portland Arts Centre and In 1986 at the National Herbarium of Victoria.

Collin gave a collection of his art work to the City of Portland and this is now housed in an extension gallery to the Portand Arts Centre which was recently named the Collin and Dorothy Woolcock Gallery. Collin's art work is to be found also in the State Herbarium of South Australia, the National Herbarium of Victoria, and in private collections. During 1989 Collin and Dorothy very generously donated their herbarium consisting of several thousand sheets to MEL along with their botany library; the orchid material was given to the Australian National Botanic Gardens (CBG).

Collin passed away on the 23rd January after a long illness. He contributed much to botany and assisted many and his collections, illustrations, photographs and publications will serve as a lasting reminder of his many talents.