You’ll find many specific references scattered through the various sections of this website. Some of those references are also listed here, but most of the ones given here are of more general interest. This is far short of a comprehensive list, and there is a bias towards information relevant to Australia, but these provide a start and each will lead you to further sources of information.

The sources of further information are divided into several categories:

Many fungal genera are very widespread and in many cases there is a particular "look" to a genus. This means that overseas field guides can be useful in Australia, to help you get a feel for various genera. Just be careful about using overseas guides to identify a species within a genus.

Despite these warnings, the Australian and overseas books are useful and you will learn a lot from them. Just use them with care. A good field guide would warn you of its own limitations.

* The asterisked books deal only with mushrooms, the others include non-mushrooms as well.

Black-and-white drawings of over 100 species and a small number of colour paintings and photographs.

This contains a fold-out identification chart, a booklet and eight sheets of colour photographs.

Hood, I. An introduction to fungi on wood in Queensland. University of New England School of Environmental Sciences and Natural Resources Management, Armidale, 2003.

A short introductory section on fungi in general is followed by the identification keys and species descriptions. There are numerous colour photographs, though a number of these are misidentified. You can find corrections here [http://fungimap.rbg.vic.gov.au/fni/fni10.html] on the Fungimap website.

This small handbook contains photos and paintings of a variety of fungi from an area generally ignored by field guides. Though there are some mistakes in the names given to species, this is still a useful book if used with care. You can find a review in Newsletter number 33 produced by Fungimap.

The bulk of the book deals with the mushrooms, with a few pages of discussion of some non-mushroom fungi. The identification key is confined to the gilled fungi. There are many black-and-white illustrations and some colour paintings.

There’s a brief introduction to some aspects of fungal ecology and structure, followed by the identification key and descriptions of over 200 species. There are colour photographs or small watercolour paintings of about half the species.

An excellent introduction to numerous symbiotic associations, with some chapters on the associations formed by fungi.

The title is self-descriptive. The book assumes knowledge of basic fungal concepts and terminology.

A good coverage of many aspects of fungal study - written from an Australian perspective. Given the diversity of topics, some chapters can be read by a very wide audience while others demand considerable biological knowledge. There are copious references in each chapter.

The title says it all - and many of the species listed in this book are also found in Australia. While the detailed descriptions may appeal only to specialists, the numerous colour drawings will give anyone an excellent overview of the types of fungi to be found on dung. After flipping through this book, you'll never again look at a wombat dropping or a cowpat in the same way.

Bell, A. An illustrated guide to the coprophilous Ascomycetes of Australia. CBS, Utrecht, 2005. (= CBS Biodiversity Series No. 3)

Once again the title says it all. The book contains numerous identification keys, a good bibliography and almost a hundred pages of excellent colour or black-and-white drawings of fruiting bodies, spores and asci.

Benjamin, a professional pathologist and amateur mycologist, has written a very readable account of the poisonous fungi and their poisons. While some sections require some medical knowledge (or a nearby medical dictionary) the bulk of this book can be read by non-medical people. Highly recommended for anyone who has to deal with cases of mushroom poisoning or is curious about poisonous mushrooms.

About a quarter of the book consists of text by Neale Bougher, explaining the basics of fungal structure, ecology, classification and examination techniques. This is followed by information about 125 species, with a double-page spread for each. On one page Neale Bougher has provided detailed descriptions of the macroscopic and microscopic features (including drawings of the latter) and on the other there's a superb painting of the species by Katie Syme. At the end there's a detailed list of references.

If you can find these books anywhere, flip through the pictures. You'll see several hundred examples of ascomycetes, polypores, corticioid fungi, puffballs, coral fungi, jelly fungi - the types that are greatly under-represented in many field guides or picture books. Many of the species in these two Swiss books occur in Australia and the books give brief descriptions of the important macroscopic and microscopic features of each species.

A good introduction to the interactions of fungi with humans and the rest of the natural world.

This is mostly non-fungal, but plates iv to x feature small paintings of about 90 species of fungi

A survey of many aspects of fungal ecology. Some fungal knowledge would be useful before you read this book.

The title says it all.

While of limited use in identification, these two books contain superb colour photographs of numerous fungi. These books give an excellent introduction to the variety and beauty to be found in Australian fungi.

The text is strictly for the specialist, but it’s worth a look by anybody for the reproductions of fungal paintings by several Australian artists. About a hundred species are illustrated by paintings or photos.

Photographs and brief descriptions of 56 species.

A special issue of this journal, devoted to "Biodiversity and Biogeography of Australasian Fungi". Technical papers, but worth perusing - and there are numerous further references.

Several hundred colour photographs of fungi, with virtually no text. Each caption contains name, month when photograph was taken and habitat. The habitat is often very general, e.g. "forest" or "forest and woodland".

Brief descriptions of naked-eye features and excellent photographs of representatives from 40 genera of fungi found in the south-west of Western Australia.

This book has a chapter ("Fungal diversity and ecology in eucalypt ecosystems" by TW May & JA Simpson) about the macro and micro fungi that are found associated with eucalypts in Australia.

This CD contains numerous photographs of the bulk of the Fungimap [http://fungimap.rbg.vic.gov.au/] target species, as well as Fungimap newsletters and some general information.

This CD contains some general fungal information and descriptions and photos of 101 species of fungi, as well as an interactive identification key. Given the very small number of species that are included, you will come across many common (and even quite distinctive) forest species that are not on this CD. You should also be aware that there are numerous missing dashes in size descriptions. For example, "36 cm" given as a cap size when "3-6 cm" is what’s meant.

This site, created by staff at the University of Sydney, is in effect a course on all aspects of the fungal world. It deals with both macro and micro fungi and is very informative. Ideal for anybody who wants to learn about fungi in some depth. 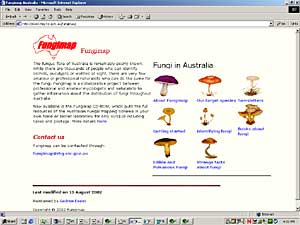 This is the Fungimap website, which features photos of the target species as well as general fungal information. You can also find all issues of the Fungimap Newsletter here.

Part of the website of the Australian Biological Resources Study, with an explanation of the classification of the macro and micro fungi.

This site, created by Tom Volk of the University of Wisconsin, contains numerous fungal facts and stories.

There are numerous websites featuring photographs of fungi. Here’s a small selection of websites. The aim is to list sites that have a reasonable number of named images and give a good geographical spread.

http://www.in2.dk/fungi/imageintroTxt.htm - This is a good starting point. The site has links to many (but by no means all) of the photos in the following sites.

http://fungimap.rbg.vic.gov.au/- This is the Fungimap website, with photographs illustrating about 100 species of Australian fungi that are easy to identify with the naked eye.

http://www.mycokey.com/BurkinaFaso.html - Burkina Faso. Once you’re in the first screen, click on The funga to get started.

http://www.bioimages.org.uk/ - This site contains images of numerous organisms (not just the fungi) that are found in the United Kingdom. The page listed is the introductory page and from there you can search for a specific organism or (via Shortcuts) follow a stepwise, hierarchical route to the species level. There are numerous fungal pictures - both of the fruiting bodies and microscopic structures, so this is a very informative site. It will be easy to use for someone looking for a specific species, but may be a bit more challenging for someone with limited fungal knowledge.

http://www.grzyby.pl/findex.htm- Poland. There are also links to many other photo sites

http://sienet.luontonetti.com/en/index.htm - Finland & Sweden. To get started, click on Welcome to The Kingdom of Fungi

http://www.mykoweb.com/CAF/species_index.html- California - with links to further photos for each species

http://www.pfc.cfs.nrcan.gc.ca/cgi-bin/matchmaker/matchmaker.asp - The Pacific Northwest of the USA and nearby Canada

http://botit.botany.wisc.edu/images/332/- Numerous images from Tom Volk of the University of Wisconsin.

http://www.uoguelph.ca/~gbarron/ - over 600 images and numerous stories!

On this page I list the websites on which I have found old botanical literature relevant to a study of the history of mycology. Many such books feature paintings or drawings, ranging from the realistic to the somewhat fanciful. There are other relevant sites and more may well arise. However, I do not aim for a comprehensive guide to all such sites but simply note a few sources via which you can get access to a good number of old fungal books.

http://bibdigital.rjb.csic.es/ing/index.php- The Digital Library of the Real Jardíin Botánico in Madrid

http://www.botanicus.org/About.aspx - The Botanicus Digital Library of the Missouri Botanical Garden.

The library staff at those two botanic gardens have already scanned many old botanical works and have an active scanning program that should see a good number of books added each year.

http://gallica.bnf.fr/ - Gallica is the online library of the Bibliothèque Nationale de France.

http://www.philological.bham.ac.uk/bibliography/index.htm - An index of online non-classical Latin texts, including various early herbals and other botanical publications.

http://www.biodiversitylibrary.org/ - Click on the word Fungi in the body of the opening page.

Before the camera, accurate paintings were indispensable for illustrating the fungal world and, even now, good paintings are still very useful. Here’s a selection of websites featuring fungal paintings. The sites are listed roughly in chronological order of the original paintings.

This website is based on the mycological library of Christian Volbracht and features images from many old mycological books, from the 16th century onward. You can choose English, French or German versions. To get started, once you've chosen your language, just click on library, bibliotheque or bibliothek along the top bar.

This site, created by staff of the Swedish Museum of Natural History, shows paintings commissioned by Elias Fries (1794-1878), often called the Father of Mycology. (Also accessible via the following Swedish language link, which also gives the Swedish common names for the illustrated fungi. http://www.nrm.se/forskningochsamlingar/vaxter/kryptogambotanik/virtuellautstallningar/eliasfriessvampplanscher.254.html.)

This Danish site featuring fungal images from Flora Danica, published between 1761 and 1874. The Royal Copenhagen porcelain manufacturers have incorporated fungi from the Flora Danica in dinnerware: http://www.royalcopenhagen.com/Press-room/Photo-Archive/Dinnerware/Flora-Danica-Fungi.aspx

The paintings are held by the Botanische Staatssammlung München, Department of Mycology. For each species there are paintings of the fruiting bodies and there are also drawings of microscopic features for a number of species. The paintings were done between 1941 and 1963. Once you have the small picture, click on it to enlarge it. The artist was Konrad Schieferdecker (1902-1965), about whom more information is available here: http://www.botanischestaatssammlung.de/DatabaseClients/BSMschiefcoll/About.cfm

The paintings are held by the Botanische Staatssammlung München, Department of Mycology. The paintings feature the non-mushroom basidiomycetes, a group which features rarely in illustrated fungal books. Once you have the small picture, click on it to enlarge it. The artist was Fritz Wohlfarth (1906-2005), about whom more information is available here: http://www.botanischestaatssammlung.de/DatabaseClients/BSMwohlfcoll/About.cfm

Paintings by two Norwegian artists. These were displayed during the 7th International Mycological Congress, held in Oslo in August 2002

Fungal paintings have appeared on postage stamps from many countries.

Strictly speaking, this is an interloper - since it features models rather than paintings! But it’s interesting.