The genus Isopogon, a member of the Proteaceae family, is endemic to Australia and contains 38 species. The greatest number of species in the genus are from Western Australia.

Isopogon fletcheri is an erect stout shrub to approximately 1.5 metres tall. Its leaves are flat, narrow-oblanceolate, leathery and about 12 cm by 2 cm wide. The flowers are creamy yellowish, crowded in a dense globular head (inflorescence) at the end of the stems. Flowering occurs in spring-summer.

The fruit is a woody cone approximately 2 cm in diameter leading to the common name Drumsticks. Isopogon fletcheri is the only species on the east coast to have an entire leaf margin. All other east coast species have divided or textured leaves. 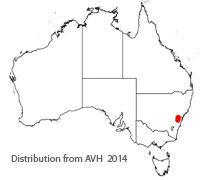 The distribution of Isopogon fletcheri is very limited. It is restricted to the Blue Mountains, predominantly around the Blackheath area. Its spread is limited due to its adaptation to sandstone and gravel soils, and its seed distribution is by gravity alone. Because of its very limited distribution and being in an ecosystem prone to fire it is listed as Vulnerable in both state and Commonwealth legislation. In addition to threats from fire the species is also sensitive to Phytophthora, a soil-borne fungus.

Propagation of the plant can be done from seed, or semi-hardwood cuttings where seed is not available. Seed germination can be sporadic, usually taking 2–3 weeks but sometimes up to 8 weeks.

The key to cultivation is moist but well-drained soil, much like or better than the conditions the plants have in their natural environment. Plants are reasonably hardy when given the right growing conditions. To achieve good drainage the plants can be grown in large pots with a free-draining substrate. Alternatively they can be grown in a raised bed situation in a sandstone or gravel-based substrate.

Only low phosphorus fertilisers should be used due to the sensitivity of the Proteaceae to the nutrient. Fertiliser should be applied in active periods of growth in spring and autumn.